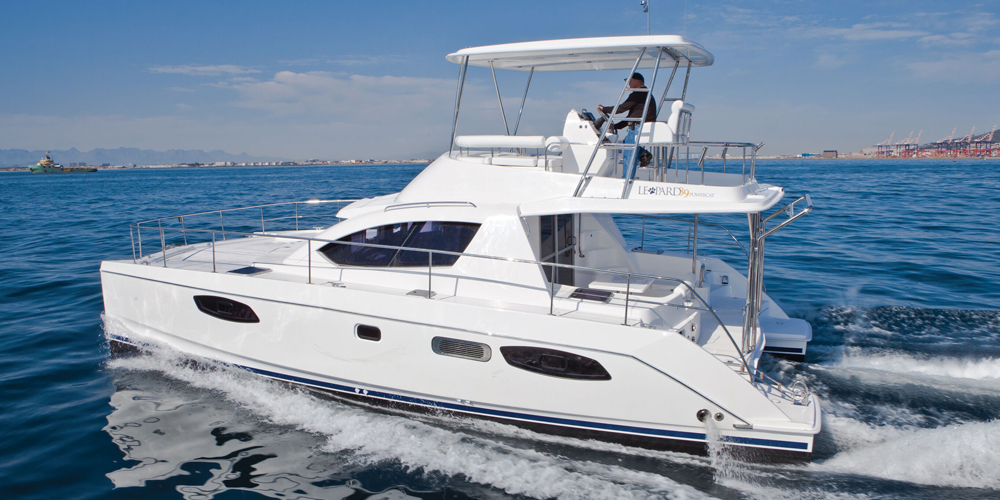 Power Catamarans are becoming more popular as people realize how maneuverable and comfortable these yachts are. Jim Adams one of our most experienced sales agents and boaters explains the Leopard 39 PC and all of her great qualities.

With the surge in catamarans over the past ten years it was no surprise that the Moorings charter company has placed power yachts in their fleets worldwide. Catamarans are easy to step aboard, ease out of a slip working throttles only, and then get underway immediately. Operating this yacht from the flybridge is fun and there’s nothing to be intimidated about.

The Leopard 39 PC is a fine example of a mid-sized catamaran motor yacht. It has the feel of a much bigger vessel when you first step aboard, and with a beam of 20’ there’s plenty of room for a whole group of friends or just family. The flybridge is accessible by molded steps with a handrail, and has plenty of walk-around room and seating.  From the flybridge there is a 360 degree view, and comes fitted with a solid hardtop bimini.  For cool or rainy weather it’s recommended to have a soft enclosure.

Cherry is used throughout the yacht, and the salon table was available in a cocktail table size or full size if converting to a bed. Ventilation in the main salon area is great, with two forward facing hatches which allow the breeze to come through while on anchor or underway, with fans thoughtfully positioned. For those warm buggy nights, two Cruisair units run off the 6KW Northern Lights generator or shore power. R&C offered this model with 4-cabins or the 3-cabin Owner’s Version, both were available in Moorings BVI, Abaco, and European charter fleets.

Underway, the ride is incredibly stable, comfortable, and it doesn’t roll (unlike its narrower predecessor the Leopard 37). Robertson and Caine incorporated a design change to the stern early on by adding a 3-foot extension which leveled out the ride considerably and improved overall performance. Power is provided by twin Yanmar 110’s or 150’s, although most were built with the 110’s. Cruising speeds of 8 – 10 knots are the most efficient (6-8 gph range total) with top speeds around 14 -15 knots, less if tanks are full and the boat is loaded with cruising gear.

The sturdy dinghy davits are push-button operated, lifting the dinghy and engine well clear when underway, and when anchored facilitate boarding or disembarking to shore with little fuss.

This Leopard is a proven yacht with open ocean capabilities, as most were delivered on their own bottoms from Cape Town to Tortola and Florida (nearly 7,000 nm) utilizing 50-gallon barrels, alternating engines, and a couple stops along the way. Ideally suited to more protected waters such as the Gulf of Mexico, Bahamas or the Keys, it’s nice to know it will handle the open-ocean if venturing out for extended cruising.

Jim’s enthusiasm for sailing began 40 years ago racing Hobie Cat 18’s. This soon developed into bluewater cruising adventures throughout the West Indies, the Bahamas, and the Florida Keys. A licensed Captain since ’84, his sailing experiences along with a diverse professional background have resulted in a well-rounded knowledge of yacht systems, performance standards, and excellent customer service. Jim is also a former client of ours (3 times) and enjoys racing and cruising on his Beneteaus. He offers a focus on detail and excellent follow-up to provide a positive experience with your yacht purchase process.
jim.adams@mooringsbrokerage.com